The Zombie Theory: Thorazine to the Rescue (Part 3)

The Zombie Theory: Thorazine to the Rescue (Part 3)

As long as I live, I shall balk at having psychoanalysis swallowed by medicine. - Sigmund Freud

Within the last 70 years, with the assistance of a trillion dollar worldwide pharmaceutical business and their partners in academia – and a willing populace – human beings are being drugged into “balance” to treat fictitious brain diseases in astronomical numbers.  In 2018, the World Health Organization (WHO) estimates 300 million people around the world have depression disorder, 60 million have bipolar disorder, and another 23 million have schizophrenia disorder and other psychoses1 - all of them in need of psychiatric medication.  According to WHO, it’s likely that accurate numbers are significantly higher as poorer countries have no way to record mental illness.  Leading the way – the United States.

The Journal of the American Medical Association (JAMA) reported in 2017 more than 40 million adults were prescribed one or more psychiatric prescriptions in America (2013).2 Race, you should know, is a factor.  One in five white adults, one in ten black adults, one in twelve Hispanic adults, and one in 20 Asian adults are prescribed psychiatric medications.  By gender, the difference is as significant.  Nearly twice as many women (20.8%) are taking psychotropics than men (11.9%).  Age matters too.  About one in ten 18-39 year-olds are psychiatric patients, nearly one in five 40-59 year-olds, and, out in front by a wide margin, a solid one fourth of adults between the ages of 60-85 are prescribed psychiatric medications.  By the way, why is “mental illness” dependent on race, gender and age?  How does the psychiatric medical model (PMM) scientist explain this?

There are 75 million children in the United States in 2019.3 Nearly 17 million are diagnosed with a brain disease.  The Center for Disease Control (CDC) reports 6.1 million children have been diagnosed with ADHD disorder, 4.5 million with a behavior disorder, another 4.4 million with anxiety disorder, and 1.9 million with depression disorder.4 And why are nearly one in five children being drugged?  The American Academy of Child & Adolescent Psychiatry (AACAP) declares there are eleven psychiatric symptoms and disorders for which psychiatric medication may be prescribed for children.  The list includes bedwetting, anxiety, attention-deficit/hyperactivity disorder, obsessive-compulsive disorder, depression disorder, eating disorder, bi-polar disorder, psychosis, autism spectrum disorders, severe aggression and sleep problems.5

“About 15,000 American toddlers 2 or 3 years old, many on Medicaid, are being medicated for attention deficit hyperactivity disorder, according to data presented Friday by an official at the federal Centers for Disease Control and Prevention.”6

“The report shows that psychotropic drug prescriptions among babies nearly doubled in one year, from 13,000 prescriptions in 2013 to 20,000 in 2014, despite the lack of evidence that shows they are effective and safe for young children . . .  psychiatrists often prescribe these drugs . . . for behavioral issues like unusual aggression, temper tantrums, or lethargy.”7

From PsychCentral, here of the top 25 psychiatric drugs that were sold in America – and the reasons we take them – in 2016:8 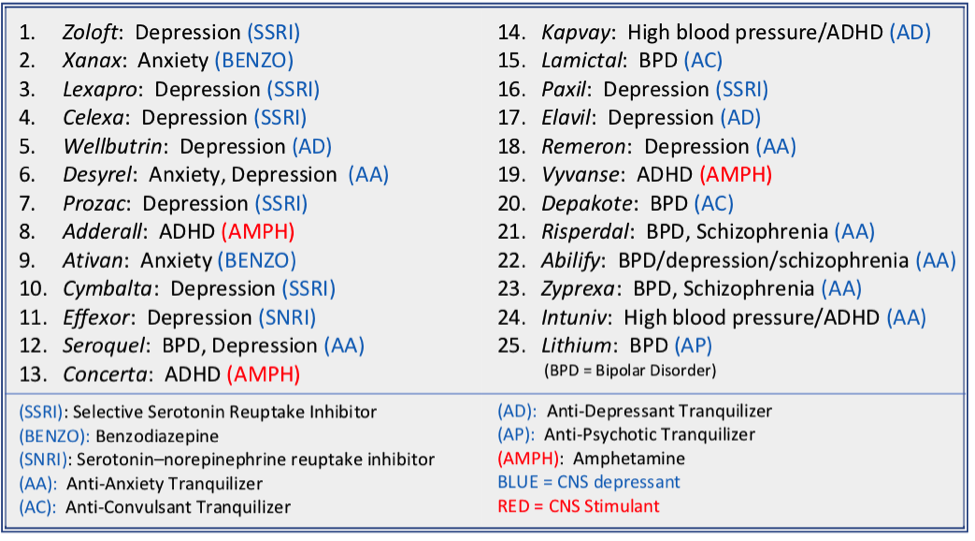 Knot in the Mood

Is there a common denominator for all of these chemicals?  Of course, and it’s easy to see.  All 25 chemicals address the same innate, unavoidable, uncomfortable, and sometimes-hard-to-shake-life-altering-human-experience:  mood.  And yes, that includes ADHD, including the effect ADHD has on the mood of others.  Ok, you may notice, schizophrenia is about consciousness, not mood.  Nonetheless, the PMM provides treatment for schizophrenia and other aspects of consciousness with the same mood medications:  tranquilizers.  Anything else these chemicals have in common?  Yes, of course, and it’s easy to see too.  Twenty-two of them are central nervous system depressants (CNSD), and three of them are central nervous system stimulants (CNSS).  What’s that about and why is it important?

Lost In the Shuffle

Rhône-Poulenc, a French pharmaceutical company, was developing antihistamines for nausea and allergies in the late 1940’s.  Scientists noticed some chemical compounds exhibited exceptional sedative effects.  Dr. Henri Laborit, a French surgeon, called this effect artificial hibernation, and described it as “sedation without narcosis.”  By 1951 Laborit was conducting clinical trials of the newest compound – chlorpromazine (CPZ) –  for use as an anesthetic booster for surgery patients.  He proclaimed CPZ the “best drug to date” in calming and reducing shock during surgery.  Known as "Laborit's drug" among colleagues9, by 1953 CPZ was released for use in the operating room.

Laborit was also a persistent advocate for clinical trials for psychiatric patients using this new wonder chemical.  His persistence was rewarded.  On January 19, 1952, CPZ was administered to a manic patient named Jacque.  Jacque’s improvement was reported to be “dramatic.”  After three weeks – and 855 mg of CPZ – Jacque was released from the hospital.  Word spread quickly about this “breakthrough.”  Dr. Pierre Deniker10, another French surgeon, ordered CPZ for a clinical trial at the Sainte-Anne Hospital Center in Paris.  His findings were even more dramatic.  Often doubling Laborit’s doses, Deniker found CPZ had much more than sedative effects.  His patients showed “remarkable improvement in thinking and emotional behavior.”  By the end of 1952, Deniker abandoned old, ineffective, and harmful shock methods and began to treat mental illness with CPZ.

Soon after, Kline & French Pharmaceuticals (today's GlaxoSmithKline) purchased the rights to CPZ from Rhône-Poulenc.  By 1954, Smith-Kline & French received FDA approval to market CPZ as Thorazine to treat schizophrenia.  The world’s first psychiatric medication was created – and marketed.  Advertisements and professionals soon were boasting how “Thorazine helps to keep more patients out of mental hospitals.”  Please remember, hospital beds were required because psychiatric patients needed time to recover from electrocution, the surgeon’s knife, or chemically induced, months'-long comas.  While a chorus of public outcries about the inhumane treatment of psychiatric patients had already begun to empty the beds of these tortuous asylums, psychiatric scientists and drug company marketers attributed this exodus to the “dramatic” success of Thorazine.

In his book The Creation of Psychopharmacology (2002)14, David Healy, the renowned British psychiatrist, professor, scientist, author – and current director of an ECT clinic in Wales – proclaims the discovery of Thorazine as significant to medicine as the discovery of penicillin.  As important, he asserts, Thorazine was also the first profitable psychiatric medication for pharmaceutical companies.  He marks the convergence of these two events – a wonder treatment and profitability – as the genesis of what he termed “biological psychiatry,” and the 1980 publication of DSM-III as bonding psychiatry to the biological cause of mental illness, forever.  Healy also details the prodigious growth of pharmaceutical companies and their promotion strategies, including coordination with academia to find new mental illnesses, and to manufacture the medications to treat them.

There were huge profits in the making for this burgeoning “take-a-pill-for-it” market, and Big Pharma began to flourish.  By the end of the 1960’s pharmaceutical companies had created dozens of “new and improved” medications for a growing number of new mental illnesses.  By then, Thorazine was regarded as just another, less effective medication, now criticized by its competitors for its notorious side effects.  And what were these “new and improved” medications from Big Pharma?  More tranquilizers.

Was the discovery of Thorazine really as significant as penicillin?  Yes, it was – if you are a proponent of the PMM.  Dr. Healy is, and he has company.  So is 94%15 of the general public and, presumably, 99+% of professionals.  However, if you are PMM antagonist, then Thorazine was – nothing more and nothing less – the world’s first tranquilizer, and a precursor to the hundreds of tranquilizers to follow.

Take a look at this chart of the top ten diagnosed brain disorders, and their causes: 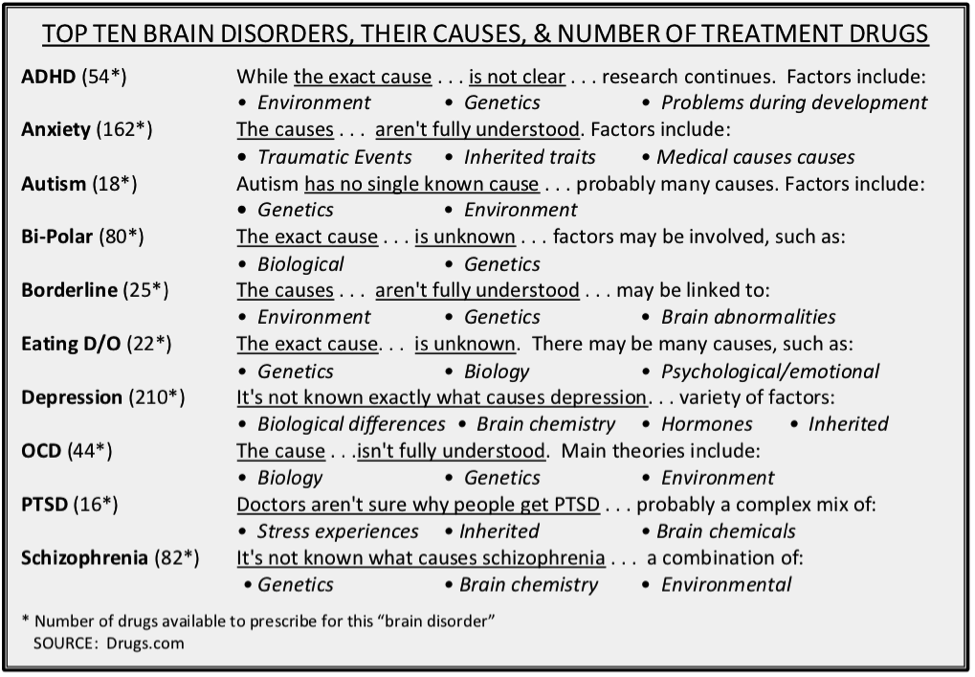 There are a total of 713 medications manufactured by drug companies for the top ten brain disorders, for which there are no known causes.  How is that possible?  By the way, these are just the top ten diagnoses.  You can see the entire list of "Medications for Psychiatric Disorders" at www.drugs.com.16 Please be warned.  If you are looking for a cause for any of the brain disorders of the PMM, you will be disappointed.  There are none.

So, do you wonder too?  What in the hell are they treating?

Jacque to the Future

When Jacque took his first dose of CPZ in 1952, everything changed in psychology and psychiatry.  In just a few decades, psychological diagnoses became medical diagnoses, needing medical oversight, medical solutions, and medical doctors to do so.  Now, a psychiatric medical patient sees a medical doctor for psychiatric medication to address a brain disorder.  Behaviors once considered understandable responses to the challenges of life by psychology became “symptoms” to the doctors of the PMM, and the “symptoms” became evidence of the underlying medical deficiency, derangement, disease, disorder, disability, disturbance, or dysfunction (the 7 D’s of the PMM).

We are approaching 50 million men, women, children, toddlers and infants in the United States who are taking pills for brain disorders.  And business is booming.  Psychiatric medications – the majority tranquilizers, a handful of stimulants, and an occasional analgesic – now number in the thousands, more created every year.  Not a single cure, and not a single cause for any of the ever-growing brain disorders of the PMM.

Did I mention business is booming?

Psychiatry entered the last half of the 20th Century on an upnote, despite a horrendous track record for the first 50 years.  The PMM scientists created a new, simple, humane, and easily administered treatment solution for mental illness, and by the 1960’s big pharma was making money hand over fist.  Only one thing was missing to unify this marriage.  Healy’s “biological psychiatry” needed a coherent, science-based, peer-reviewed theory to explain how all these miracle drugs worked.

Well, they found one.  It’s about bad brain parts.  And a Zombie comes with it.

NEXT TIME:  Part 4:  The Dope About Dopamine – and Other Ridiculous Notions

“When the doors to that dorm opened up a strange group of men would exit. They would seem to be in a hurry, but unable to coordinate their movements. Their heads would hang down and half expressions would ripple across their faces. They would run their hands over their heads over and over, and open and close their mouths while sticking their thick tongues out. Their gait was particularly peculiar, with stiff legs dragging their feet along, all the while seeming about to topple. We called this the ‘thorazine shuffle.’” - John Lash - Behind the Thorazine Shuffle, the Criminalization of Mental Illness (2012)17

7 Psychiatric Drugs For Babies? More Kids Aged 2 And Under Getting Prescribed Antipsychotics:  https://www.medicaldaily.com/psychiatric-drugs-babies-more-kids-aged-2-and-under-getting-prescribed-antipsychotics-365236

9 Some of his colleagues referrered to the effect as “non-permanent, pharmacological lobotomy."  https://en.wikipedia.org/wiki/Antipsychotic#History

12 For a thorough review of thorazine advertisements see:  http://www.bonkersinstitute.org/medshow/thorazine.html

14 See a review of The Creation of Psychopharmacology@https://www.ncbi.nlm.nih.gov/pmc/articles/PMC1279263/

17Behind the Thorazine Shuffle, the Criminalization of Mental Illness. https://jjie.org/2012/03/16/behind-thorazine-shuffle-criminalization-of-mental-illness/