No One Cares About Crazy People

No One Cares About Crazy People

No One Cares About Crazy People.

Actually, that’s not true. Ron Powers, the author of the book with the above title very much cares about “crazy people”. It took him 10 years to write this book, a highly personal, well thought out, historically accurate and depressing book about madness in America. No, not madness in America, better to say the madness about madness in America. So why 10 years? Well, he had 2 sons, only 1 now. His younger son Kevin, who was diagnosed schizophrenic, suicided by hanging 10 years ago. The father has been stewing and grieving and questioning ever since, struggling to understand what happened. What happened not only to Kevin, but what will happen to his older brother, Dean, also diagnosed with schizophrenia, and what has happened to us, the mental health field. The subtitle is telling: The Chaos and Heartbreak of Mental Health in America. I am a psychiatrist so therefore I am part of that heartbroken mental health structure. Oh dear! 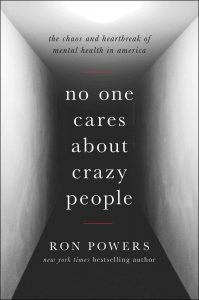 Powers does a particularly good job describing the tragedy of de-institutionalization, “a name that carried the lilting harmony of silverware spilling from a clean-up tray” (page 187). Nice metaphor. Indeed, liberals and conservatives were able to come together for once and completely make a botch of it. Liberals loved the idea of getting rid of inhumane state hospitals and conservatives loved the idea of getting rid of expensive state hospitals. Both could then pretend that community clinics would give out the new wonder drugs, some counseling, and madness would be contained. What happened instead was the mad were transferred to jails and out onto the streets. Powers is cognizant of Robert Whitaker’s work (Anatomy of an Epidemic) so he has some familiarity with the serious limitations of drugging madness. He is too impressed, I think, with genetic and neurological research, which he uses to try to deepen his understanding of his kids. I get it. A decent man, a devoted, loving father, how could this happen to my 2 brilliant, artistically talented sons?

“What is schizophrenia?” he asks (page 21). “So little is known abut schizophrenia that neuropsychiatrists and researchers hesitate to offer a definitive theory of causation.” So perhaps you now see the problem. He is thinking “brain” rather than “person". Madness or schizophrenia or whatever label you wish to use, is a person problem, the problem of the person not getting along. Wow, after 40 years of practice, Dr. Joe, is that the best you can come up with? Schizophrenia is not getting along? My mentors would be so disappointed in me.

Harry Stack Sullivan warned his colleagues, his patients, and his students, to beware of the seduction of the sense of individual uniqueness. No crazy person, no sane or normal person, no one has an absolutely unique psychological interpersonal problem. That is why AA, support groups, NAMI, Hearing Voices International, and group therapy, are such effective healing agents. “I am not the ‘Lone Ranger.’ Others are like me. Others like me seem to do OK. I am not alone.” But, there is no cure for being human. And to be human means to be up against never wholly fitting in. In fact, fitting in is an illusion.

We label the young men/women who seem to be seeing the world in some peculiar way, hearing and seeing stuff others can’t see or hear, believing their own set of “alternate facts.” They act out the not-fitting-in whereas the normals (an interesting name for a rock band – THE NORMALS) ‘go along to get along.’ We normals – I have never been labeled schizophrenic , I have been called a bunch of other names on some occasions – suffer more quietly, discretely, keeping it to ourselves: “Thank you so much for the invitation. I will not be able to attend your gathering because of a previous engagement.”

If you haven’t read Freud’s Civilization and Its Discontents, I recommend it. The “death instinct” he postulates is not, I believe, to be taken literally. He is talking about the yearning to rid ourselves of anxiety. Being dead is really the only way to be anxiety free. To be a person, a unique creature, with common struggles must contend with anxiety, that felt experience anticipating disapprobation, rejection, and abandonment. And we do deal with it, sometimes constructively, sometimes foolishly, sometimes with deadening drugs, and sometimes with suicide.

God be with you!