David Katz, the Jacksonville shooter, is the latest in a long line of scapegoats for an apparent epidemic of violence. Just this past Sunday he opened fire at a e-sports tournament, wounding 10 and killing three, including himself. Katz' motives are still under investigation, but people are already implicating the bogeyman of mental illness. See CNN's reporting today - Jacksonville shooter had a history of mental illness and police visits to family home. 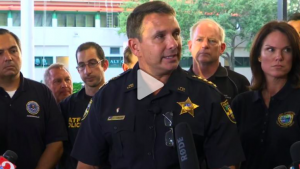 According to the report, Katz was prescribed "a number of psychiatric medications," including antidepressants and antipsychotics. He also was said to have seen "a succession of psychiatrists." These statements imply that Katz' a mysterious alien entity residing with him, called "mental illness," was the culprit. There is even current quibbling over what the "correct" diagnosis was.

A more reasonable explanation would be that Katz had been struggling with several real personal dilemmas, he wasn't infected with a nonsensical illness of the mind. Just one example is that he had to witness his parents' vicious divorce and custody battle over him. Instead of following the suggestion of his father for peer-based support group assistance during middle school, there was the default turn toward psychiatric treatment, as if there was something in him to truly treat via medical means.

If the treatment went as it typically does, this would have meant increasing focus on him as the problem, rather than his circumstances. Being subjected to a "succession of psychiatrists" means that one superficial attempt after another didn't work, so he was shuffled to the next psychiatrist in line. He likely felt the increasing sense of being misunderstood and persecute by those medical attempts to sedate him.

This is just the last in a long and continuing line of horrific episodes. It will continue. It will continue because the authorities are not looking at the causes of these events. They are trying to find a scapegoat. Three hundred years ago that scapegoat would have been witchcraft or demons. Now, it is the internal infection of "mental illness."

To make matters worse, the alleged treatment for that infection is typically to coerce the person into compliance. In other words, it is to get them to stop complaining about the problems (euphemistically called "symptoms reduction"). And the icing on the cake is that psychiatric drugging into a state of agitation clearly increases the chances of impulsive outbursts of violence. See ISEPP's White Paper on the link between psychiatric drugs and violence.