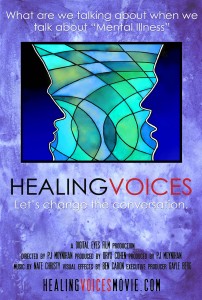 ISEPP participated in the worldwide screening of the "Healing Voices" documentary film. On April 29 and May 2, 2016, ISEPP hosted  the screening of a new 90-minute social action documentary about mental health called "Healing Voices" written and directed by PJ Moynihan of Digital Eyes Film. It screened in more than 120 locations across the US, Canada, UK, New Zealand, and Australia staring on April 29th. The documentary explores the experience commonly labeled as ‘psychosis’ through the stories of real-life individuals, and asks the question: What are we talking about when we talk about ‘mental illness’? The film follows three subjects – Oryx, Jen, Dan – over nearly five years, and features interviews with notable international experts including Robert Whitaker, Bruce Levine, Celia Brown, Will Hall, Marius Romme, and others, on the history of psychiatry and the rise of the ‘medical model’ of mental illness.

The ISEPP hosted screening took place at the College of Southern Maryland in La Plata, MD. There was a great turnout by students, faculty, and local residents. Many were unaware of the more humane way to approach this problem. A few participants were even interested in starting up a local Hearing Voices network!

Thanks to Digital Eyes for giving ISEPP this opportunity!