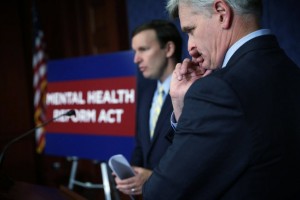 A recent edition of U.S. News and World Report highlights the provisions of two bills in Congress that claim to enhance the mental health system in our country. See here for the report.

But a more critical examination of these bills shows us they are both dangerous.

God knows we need to improve our mental health system, especially our ability to help people who are diagnosed with serious mental illnesses1. One piece of evidence is the following underreported fact: The great majority of people who have shot up schools, workplaces, movie theaters, churches and families have been patients in the mental health system and the system has failed them.

The Federal government is a major source of funding for mental health services, spending about $72,000,000,000 in 20142. Thus, the Federal government has an opportunity to improve the mental health system. These two bills in Congress are designed to improve the system. By far the more important one is HR 2646, the Helping Families in Mental Health Crisis Act. It was introduced by Representative Tim Murphy (R-PA).

If enacted in its present form, HR 2646 will make our mental health system more punitive, oppressive and medicalized. By defunding and downgrading programs that help people recover from the states of being that are associated with diagnoses of serious mental illnesses, the bill goes in exactly the wrong direction. Here is what HR 2646 does:

It increases the scope and breadth of court-ordered (involuntary) outpatient psychiatric treatment by providing funds to states for spreading it and requiring states to adopt such laws by conditioning receipt of Federal funds for community mental health centers on such adoption;

It emasculates the recovery-oriented, consumer-involved initiatives of the Substance Abuse and Mental Health Systems Administration (SAMHSA) by placing SAMHSA under a newly-created Assistant Secretary for Mental Health and Substance Abuse and preventing SAMHSA from establishing any program or project not explicitly authorized or required by Congressional statute.  This puts in jeopardy the efforts to train recovered peers and establish peer specialists as an integral part of the community mental health system, the annual Alternatives conference and the spreading of Emotional CPR;

It terminates funding for the National Empowerment Center and the National Coalition for Mental Health Recovery, both organizations which develop and promote recovery-oriented approaches and the incorporation of recovered peers into the mental health system;

It increases funding for biopsychiatric treatment and research by giving control over the $400,000,000 annual appropriation for community mental health centers to the Assistant Secretary and giving increased funds for brain research to the National Institutes for Mental Health. The bill stipulates that these funds can be used only for "evidence-based practices". This can be used to abandon recovery-oriented approaches which are clearly effective but have not been subjected to rigorous research; and,

It weakens the ability of the protection and advocacy agencies to protect the human rights of persons diagnosed with mental disorders by prohibiting them from "counseling an individual with serious mental illness who lacks insight into their condition on refusing medical treatment or acting against the wishes of the individual's caregiver."

Here are some other problems with the bill:

It downgrades and weakens the federal agency most supportive of recovery, peer support and community integration;

It places much more emphasis on medical treatment rather than on supporting the empowerment and recovery of persons through their active participation in their recovery and community;

It promotes a narrow, professionally-focused system of care in stark contrast to current thinking in healthcare which is moving rapidly to implement patient-centered care, shared decision-making and self-management of chronic conditions;

It ignores the significant role of toxic stress and trauma and precludes interventions which have been proven to be effective in helping people who suffer from those experiences;

It will keep people in clinical revolving doors rather than moving forward with their lives; and,

It expands the use of forced treatment which harms rather than helps people.

The Murphy bill, as it is called, reinforces and expands the mainstream standard of care. That standard of care has led to a dramatic increase in the number of Americans who receive Social Security Disability due to a mental illness3. The Murphy bill enfranchises a system of care which uses drugs as the primary modality of "treatment", an approach which harms rather than helps people. The fact that most of the billions of dollars spent by the Federal government on mental healthcare harms rather than helps people is tragic. This bill would make that tragedy even more widespread and entrenched than it is today.

What would a good mental health bill look like? It would close the gap that has been created by the $4,000,000,000 reduction in state funding for community mental health over the past 5 years. It would promote and expand alternatives to the mainstream standard of care such as Soteria-type sanctuary houses, open dialogue approaches, the Hearing Voices Network of support groups, peer-run crisis respite programs, peer bridgers, supportive employment, housing first and peer-directed training such as WRAP, Emotional CPR and Intentional Peer Support.

1The term "mental illness" is being used in this article in order to facilitate a discussion between people with extremely varied conceptions of what "mental illness" is. There are big problems with the term "mental illness". Although many “mental illnesses” are illnesses in the sense that they impair the ability of people to function well, to live full and satisfying lives, the states of being that are diagnosed as “mental illnesses” are much more than illnesses. They are also wake-up calls, opportunities for learning and growth, numinous experiences of connection with the divine and moves towards reconstitution of selves which have been discounted, abused and traumatized. To see them just as illnesses and disorders is a damaging distortion.